WarnerMedia and Discovery completed a massive merger, and the combined company is now known as Warner Bros. Discovery. The news was announced on the company’s @wbd Twitter account:

We are excited to announce that WarnerMedia and Discovery, Inc. are now Warner Bros. Discovery. pic.twitter.com/PscY04cK9L 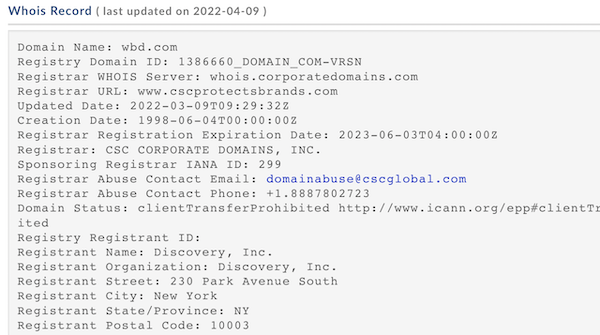 Using the Whois History tool at DomainTools, I can see the WBD.com domain name acquisition appears to be recent.

I would imagine the acquisition cost of WBD.com was quite high unless there was corporate dealmaking at play. Using Archive.org, it would appear that the domain name was used as a forwarder to the WBD.ru website. Although this doesn’t really maximize the usage of the domain name, there probably wasn’t much motivation to sell the asset. Perhaps we will learn the acquisition cost in a subsequent filing with the SEC.

Acquiring the WBD.com domain name was a smart move. The domain name acquisition has been added to the list of corporate domain name upgrades kept on Embrace.com. A couple of weeks ago, I shared that I began …