Pharmacia.com was once a domain owned by mega-pharma company, Pfizer.

The domain expired, dropped, and was auctioned off at DropCatch, where it closed at $18,000 dollars, with DropCatch user “reference” being the winner.

Why would a domain registered in 1994 expire and drop? 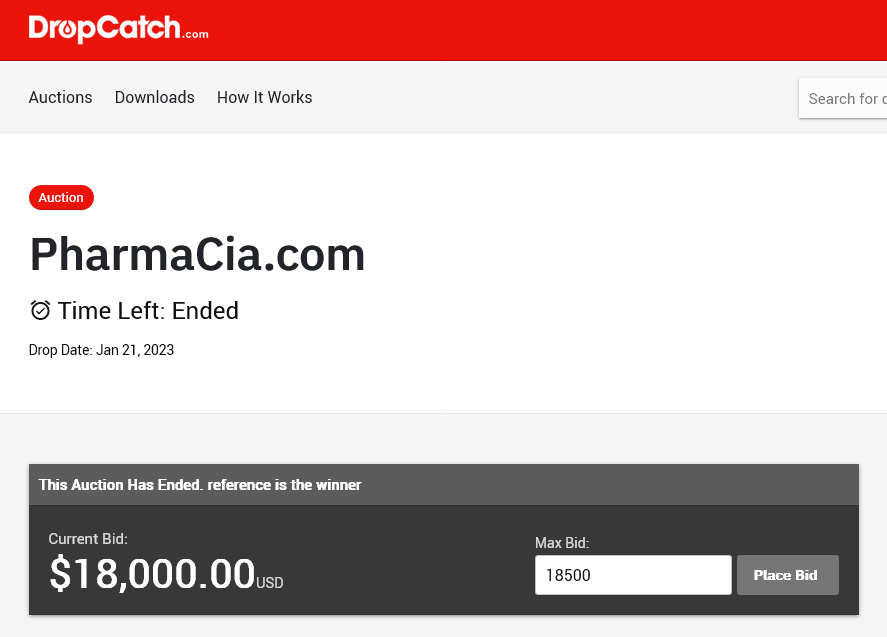 The roots of Pharmacia Corporation date back to 1837 when a leading Italian pharmacist, Carlo Erba, started his own company, which later became Farmitalia Carlo Erba. This company would later unite with Kabi Pharmacia, which began in 1951. These two companies, along with Pharmacia Aktiebolaget, formed the three main points of origin for Pharmacia AB, which was established in Sweden in 1911.

In April 2000, Pharmacia & Upjohn completed a merger with Monsanto and Searle creating Pharmacia, a dynamic new competitor in the pharmaceutical industry. This top-tier company’s innovative medicines and other products saved the lives of many and enhanced health and wellness. Following the merger, Pharmacia continued Searle’s agreement with Pfizer to co-promote Celebrex, which was originally co-developed by Searle and Pfizer.

There were later developments, according to Wikipedia:

The domain Pharmacia.com remained at MarkMonitor under the control of Pfizer. For some unknown reason, the domain was not renewed in November, resulting in its eventual deletion. The domain name Fox.org was registered in 1996 and in recent years it didn’t resolve, …

Powered by WordPress | Designed by Satya
© Copyright 2023, All Rights Reserved